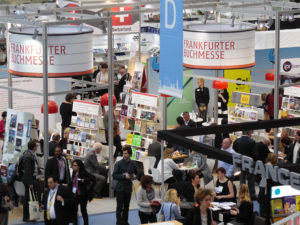 The Frankfurt fair is the worlds most recognized and largest book fair that attracts readers and writers from all over the world. The Frankfurt book fair is also a place where many people get to meet and rub shoulders with their favorite authors. Attendees also get to listen to lectures from several renowned authors, listen to book readings and have their books signed.

This year, the book fair saw a larger number of visitors than it has in other past years. It ran on for a week before coming to a close amid many differences and issues. The agenda for this year’s book fair was on digitalization and politics. The French Prime Minister, Emmanuel Macron, opened the book fair officially with a moving speech. Angela Markel, the German Chancellor also gave a speech during the opening.

Big names in the literary world graced the book fair. These included French speaking authors, English-speaking authors, and German speaking authors among many others. Notable big names of the attendees were Leila Slimani, a renowned French author, Michel Houellebecq, Edouard Louis all French authors, Ken Follet, Dan Brown, Cecilia Ahern, and Nicholas Sparks from the English-speaking world among others. German-speaking authors were Reinhold Meissner, Robert Menasse and AyaCissoko the boxer among many others. Dan Brown, whose books like The Da Vinci Code are widely read, held a reading for those attending the fair. The reading, done in front of over 1800 people streamed live too.

One of the highlights of the Frankfurt book fair 2017, was honoring the Canadian author Margaret Atwood with the Peace Prize. On Sunday, which was the book fair’s closing day, Canadian author Margaret Atwood received the Peace Prize for her work with the German Book Trade. Margaret, a 77 year old soft spoken woman and recognized for her cold views that however capture contemporary views with a quality that arouses emotions, talked about why it was important to write in an age where history was significant.

Referring to the situation in the United States, she said, “We don’t know where we are. We don’t even know exactly who we are.” she further went on to say how things have changed over the years in the United States. In the past, Margaret said, The USA was a symbol of democracy and freedom. What there are now are scenarios of horror due to totalitarianism. All her sentiments about the current state of the US are in her novel “The Handmaid’s Tale.” The book has since made it to the big screen, making an Emmy award winning series for the television.

The Frankfurt book fair however did not end with a smooth sail. There was controversy over the running of the book fair. A local daily wrote that presentation of awards to ideas that were not right was allowing Neo-Nazis to take the day. The same issue caused disruptions and violence with placard carrying demonstrators shouting down the move. The police had to come in and quell the situation.

Who Holds The Next Book Fair?

Georgia took the baton to hold next year’s event, which will take place in October 2018. Georgia’s culture minister, MikheilGioradze could not hide his joy at the news and spoke with pride about how an honor it was for Georgia to hold the event. Apparently, he said, the event coincided with Georgia’s centennial independence celebrations.

Georgia like France has world-renowned literature authors and a literary tradition that dates back to the 15th – century. The country enjoys a lot of culture and there is no doubt that the book fair festival will have rich Georgian culture rule the ceremony. The CEO of the Frankfurt book fair Juergen Boos, closed the ceremony by finally handing over the baton.

Chroniques de la Rentrée Littéraire is a website for French book enthusiasts. The website gives detailed suggestions and recommendations on everything you need to know about French books in either print or the upcoming ones. Through the website, you also get to find out what French book are currently being translated to other languages especially into English and which ones are waiting for translation.

Quote of the Day

The heart of a father is the masterpiece of nature.